How To Get Faster

Once you get a feel for the car that you’re racing – and that part is just down to getting laps in the seat – you’ll probably find that you have to have a bit of a think about how to get faster.

At first, it’s all your brain can take to be able to actually control your car at high speed, and try not to exceed the limits. This soon becomes a subconscious act, and you’ll find that you’re able to think about other aspects of driving – and here’s where you can improve.

In my experience, the most important things to work on:

Learn the racing line. The racing line will effectively straighten out every corner, allowing you to carry more speed through them. There is a natural line to most tracks that you’ll get a feel for quickly, but there are lots of exceptions where the racing line will be different because of bumps or the camber of the track. Playing games may miss out some of these things, but watching onboard videos and following other cars around will help you, here.

And it leads neatly into the next thing…

Use all the track!

If you’re ever more than a few millimetres away from the edge of the circuit, then you could have done it faster.

It’s amazing how even experienced racers will drive like they’re scared of the edge of the track – often sitting a foot or more away from the edge before turning into a corner.

If you concentrate on being as close as you can to the edge of the track, and follow the racing line, it will open the track up massively. Everything will feel less rushed, and you’ll be able to carry more speed everywhere. A few inches really can make all the difference! This is the main thing I watch videos for. I want to know exactly where the fast drivers are slamming the anchors on, so that I have a reference point to do the same. Consistent braking is the key, here, because you need to spend time working on it to be able to brake at the maximum.

And I should say that I’m talking about straight-line braking – once you’ve got this down, you should brake even later and trail brake up to the apex of the corner. Not everyone trail-brakes, and I suspect a lot also trail brake without knowing they’re even doing it…

Getting the power down

This one is actually between straight-line braking and trail-braking. If you’re on the power early, you should be able to carry more speed down the next straight. You should get the power on early enough that it carries the car right out to the very edge of the track on the exit – if you’re exiting the corner 2 foot away from the curb then you could have got the power down earlier, and done it faster.

This is also the safest way to go faster. if you go slowly into the corner but are fast coming out, it’s better (unless you’re racing another car that will stuff it up the inside of you and do a block pass!). If you go into a corner too fast you’ll just crash, run wide, or naturally have to exit the corner slower to stay on the track, so this is a far riskier way to get faster.

If you go in nice and safely and then get on the throttle, you can get off the throttle again if it all goes pear-shaped, or save it with some opposite lock (or drift it around on the power and look like a proper hero!).

“Slow in, fast out” is a great mantra. 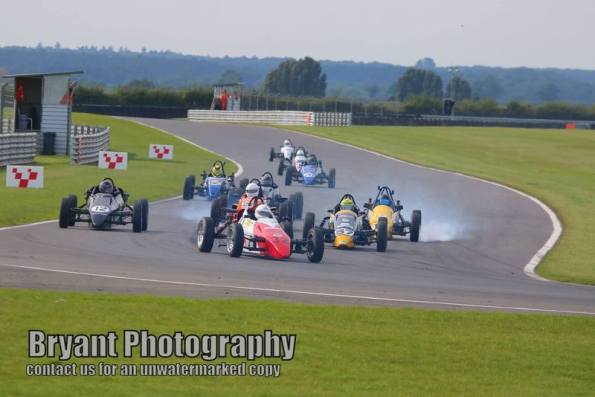 Once you have all this, you’ll find you’re not doing it on every single corner. There will always be some corners that you’re slower in.

Take one corner at a time, and work on it. This is where testing helps a lot.

These are all the things you can do that can gain big chunks of time. There are a lot more smaller things that will chip away at those last tenths, and to be honest, even after a year and a bit of racing, I’m still not at a level where these smaller things are worth too much worry.

There are also the things that will make you smoother but not necessarily gain any time – heel and toe, anyone?

And so we’re nearly ready to kick off the 2017 season at Oulton Park on 01 April! I say “we” – my car still has no engine, but as I’ve said before, it wouldn’t be the start of the season if we weren’t still working on the car at midnight the day before the first race!

Good luck to everyone this year – let’s keep it safe and give everyone a great show of racing!