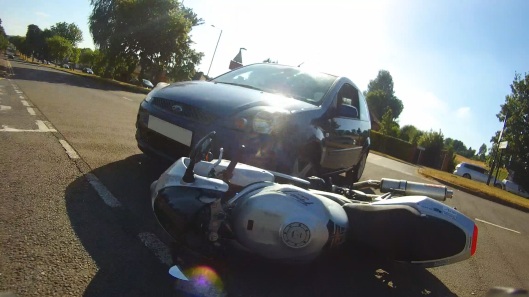 As I flew through the air shouting a rude word at the car driver who’d hit me, my thoughts were already turning to Mondello Park.

My helmet slammed into the road, and then I was trying to pick my battered Honda VTR1000 up with the aid of a couple of people as I realised my ribs were broken. As they moved the bike out of the road I knew that with the race only a week away, I was in trouble.

Fast forward through a week of trying to play down my injuries, a random allergic reaction swelling both eyes shut, not taking pain relief so I didn’t build up a tolerance, and not even being able to climb into the Sheane Formula Vee, I helped Glenn Hay load up with my left arm still as weak as a kitten.

He headed off for the ferry and I had one more day for my body to recover before I was on a flight hours away from having to race.

I turned up the radio on the hired Nissan Micra as I crawled in traffic out of Dublin towards Naas on the N7, amusing the woman behind as I blasted Rick Astley at an uncouth volume because I thought it was funny.

Arriving at Mondello Park I ran up to sign on for the free testing, noting all the other UK Vee’s had driven 6 test sessions already, spoke to Glenn as I donned all my race kit, and dropped myself with only a slight scream into the driving seat, just in time to catch the last session.

I agonisingly tightened the six point harness and found the race seat gave me enough bodily support that I actually could work the steering wheel with just my arm muscles.

I rolled out of the pit lane, acutely aware that if my rib fracture was unstable, with my increased heart rate (around 170bpm at full race pace) and breathing, I’d soon find out if it would puncture my lung… 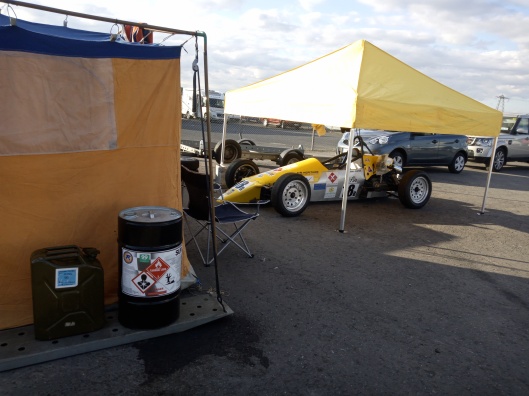 The run-up to Mondello had not gone smoothly at all. It seemed like one cost had been piled on the next – ferry prices and a mix-up with offers with some paying £800 (we got it for £260)… Then we found Ireland only has 95 RON petrol, so we would have to pay around 200 Euros more for 99 RON fuel to be delivered to the track… Then we found we all had to wear full fireproof underwear (thanks to Giles Groombridge and James Harridge for helping out with this)… Then we were told the ‘free’ festival races would cost another 100 Euros…

But we were racing at a new track, in a new country, and it was about time we gave some support back to the Irish racers who’ve raced with us in the UK.

Now flash back once more to the test session – I heaved myself out of the car and took a few paces, swallowing down the pain. It was a very tricky circuit, but the important thing was that I’d be able to race. I expected to be at the back of the grid, but not too far off the pace.

I was on brand new tyres, and in even in the heat it was good to finally have some rear grip in the car once again!

I concentrated on trying different lines, watching what everyone else was doing, and trying to decide whether to use second gear at the three tight corners, or to keep it in third.

Of the 19 UK cars registered only 15 would make it to the grid, and predictably I’d qualified in thirteenth place. It’s probably also worth noting that it was all the quick drivers who’d made the trip over, and so I wouldn’t be gifted many places ahead of where I’d normally be!

I stiffened the front anti-roll bar to get some better turn-in for the slow corners, and decided I wasn’t going to enter the Festival races unless I knocked at least two seconds off my lap times. 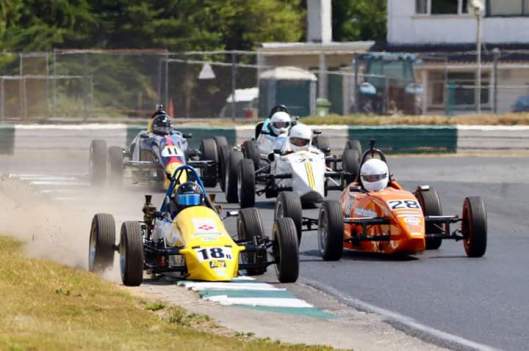 The lights changed very quickly, and I mildly fluffed the start but didn’t lose out too much.

I locked a front wheel and ran a little deep into the first hairpin, but recovered it well to still pass Sam Engineer on the exit, and suddenly I was looking at Bill Garner and the chance to take second in Class B from one of my usual rivals.

I ran over the edge of the curb on the very next corner and Sam slipped by me again as I twisted my brake bias dial a little more to the rear.

The car felt good and I stayed with Sam, diving to the inside into the first corner on the next lap and pulling a small gap as I concentrated on chasing down Bill.

The races were timed 15 minute sessions, which was great as you knew you were getting full track time, and could actually see the clock counting down by the start line.

I steadily increased the pace for the next few laps, but Sam was still with me and sticking his nose alongside, but I was drawing in my B Class target.

I saw Bill go in hot to Bridgestone, and as he slid wide I was alongside him on the exit and had the line into the Esses, where I knew I was faster.

I stayed in front for the next two laps, but he was soon onto my trick into Bridgestone – braking before the right kink then getting back full on the power for a moment before braking hard for the right hairpin – and was all over the back of me with the orange of Sam still there in the mix, too.

He got a great run onto the start straight, and although I covered the inside he had enough to sneak by under braking and cut my front off, gently tapping my front wheel with his rear as he went through (I don’t think he even felt it and it didn’t do much but turn my wheel slightly).

I chased on, with so little between our cars we were regularly alongside each other, sliding around and having a great scrap.

I still had a slight advantage through the Esses, and outbraked him into the final hairpin over the very tricky crest and seeing five minutes left on the clock.

I started swinging wide and onto some extra tarmac on the entry to Opel, screaming it in third now down to Bridgestone with the extra speed, but I couldn’t shake Bill, and Sam was only hovering just behind ready to take advantage of the slightest mistake.

Taking a very defensive line into the Esses and staying inside into the first hairpin were enough to hold Bill at bay, although it was slowing us both up. One minute left.

I came out of the last hairpin with relief, but then to my horror saw there was no chequered flag out!

It was the one time I’d stayed to the left, and I swore to myself as he edge up my right hand side down the straight.

We glared at each other as we approached the braking point, neither one wanting to give in.

Sliding into the corner, drifting through it and then kicking the back end out as we got back on the power, we were inches apart but not touching.

We were still locking eyes through Opel, twicthing the steering wheel to correct, and alongside all the way down towards Bridgestone with me on the outside line.

I pushed Bill late into the kink, watching him sail past too late into the braking zone for Bridgestone as I cut back in tight, getting alongside him with my right wheels just kicking up the grass at the edge of the track.

At the Esses he wasn’t suckered into the same move quite so easily, but I still cut back and used my advantage to get a good run down to the final turn, both of us braking impossibly late, but me even later as I dived to the inside as I had done earlier.

This time I locked my right front just slightly, and Bill had to delay his turn in whilst I tried to gather it all up and get my own car turned. I let off the brakes and got straight back onto the power to drift tight up the inside, snatching full opposite lock and staying hard on the throttle.

I was at an obscene angle but I’d got through the corner, but then couldn’t wind off my opposite lock as the car was still rotating, rotating, and then I had a grass bank directly in front of me! 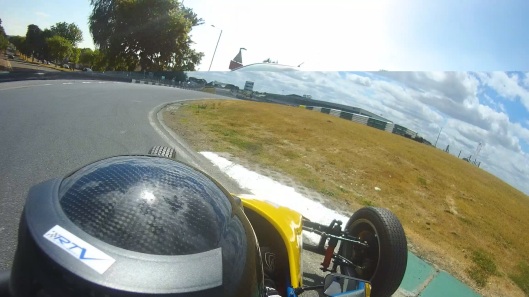 I floored it in second, blasting up the dusty incline and spinning the rear up again to do a full circle, a flash of orange parting the dust in my mirrors as I spun the car back around, down the bank, smashing my nose cone into the tarmac and still fighting the wheel with my foot in.

As I headed for the line Justin Chatten added insult to injury by just pipping me to the post as well!

I was mad with myself for a few seconds, but then the epic last lap sunk in and I had to hand it to Bill for a great drive and a battle I won’t forget!

That sort of scrap is the whole reason why I race, and when you’re involved in something that close it really doesn’t matter about your overall result, because it feels like a win either way.

As it happened, with James Harridge having engine troubles and dropping out, it turned out that last battle scrap was for the B Class win – so I couldn’t be too unhappy with a crowd entertaining second place!

Better still, my ribs were still in place, and with every painkiller I could get inside me, I just had to wait until Race Two to even the score… 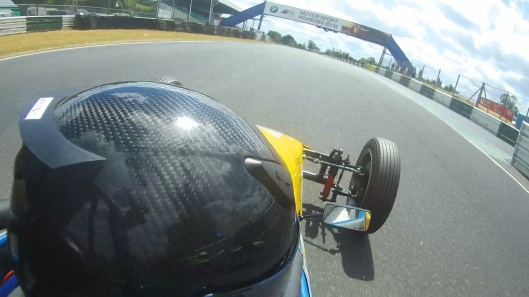