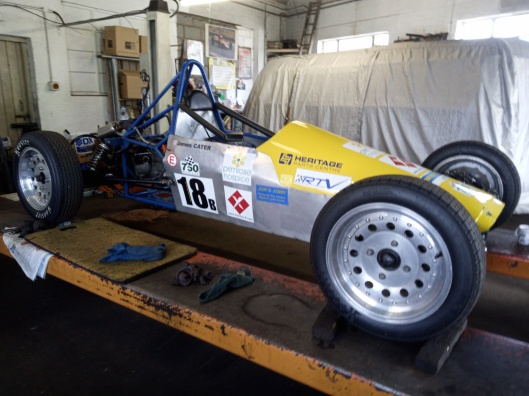 After coming away from Silverstone with more piston problems, we were left with a few hard decisions for the rest of the season: 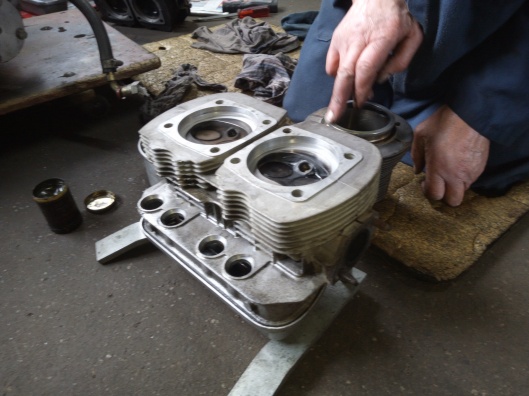 We’re not quitters, but we’re not stupid, either, so went for the latter option with some long hours for me and even longer for Glenn!

We made it, driving down on the morning for the one-day event, and the sun was even shining enough for me to make use for my customary sun cream.

I still had to be a bit gentle for a few laps to run the engine in, and with the maximum of 32 on the grid (with several reserves also waiting in the wings) that was always going to be a bit risky.

For Silverstone I’d made a change to the front anti-roll bar that shouldn’t have worked at all, but weirdly it had, so I left it. Even weirder, now it chose to do what I’d expected it to do, meaning I had some horrible understeer going on! At Old Hairpin and Coppice especially I was having to really wrestle the front end in – easily fixable, and the balance of the rest of the car was great, so I was still happy.

Unfortunately the number of cars on track led to inevitable yellow flags out for cars that had gone off. This meant the only flying lap I managed to get in was red flagged into the chicane, leaving me in a disappointing 21st and 17th for the races.

As most other had the same issue, this would mean a fair few of us were out of place, so I had some work to do in the races to get back up there!

More worryingly, we had been leaking a bit of oil, which we didn’t need at all. 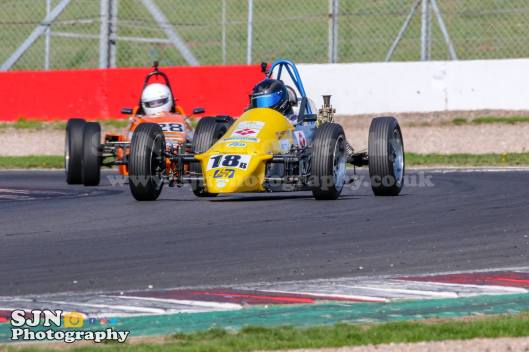 I got off the line fairly well, but then got boxed in behind Vaughn Jones. I’d still made up a few rows and could see Bill ‘Wom’ Garner and Andrew Cooper just ahead, so we had the first 4 Class B cars that close into the first corner, and changing positions all through Old Hairpin and up the hill. 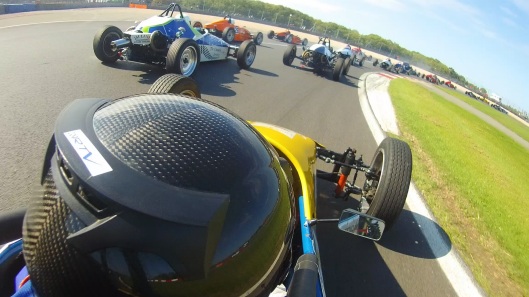 Alex Jones went to the outside of Vaughn around McLeans, and I had a good enough run to outbrake both of them, sailing through on the inside and setting my sights on the orange car of Sam Engineer ahead.

As we hit the brakes for the chicane I could see all sorts of nonsense kicking off ahead.

Colin Gregory had spun and was stationary sideways across the track, and Rik Lanyi spun in avoidance, also ending up sideays just as I was turning into the first part.

With no clear route through I scrubbed as much speed as I could before abandoning it altogether and flicking my car to the left, away from the carnage but over the gravel trap and raise ‘sausage’ curb.

After getting a bit airborne I landed facing the right way on the start straight, t back on the power – miraculously, everyone else made survived the spins without any contact, and so everyone continued!

It had shuffled the field a little, and now the orange car ahead was Ed Lowndes, with Sam behind me.

I pulled the same move as the previous lap on Ed, my front right locking slightly but still sticking the car up the inside on the brakes. I held him behind me for the next lap as I tried to get on the back of Wom, but then Ed got a great slipstream to get ahead through the chicane, and Sam followed him through on the next straight.

I now had the two Bears cars of Alex and Richard Waddingham looming in my mirrors so figured I may as well just go for the orange cars instead of worrying about defending.

Sam pushed Ed hard into Redgate, but I knew they’d both left their braking too late and let Sam slide from the inside line, cutting Ed off, and then I cut back on the normal line and was alongside Sam at the top of the hill. Not seeing me, he moved right for the kink, putting me on the grass and forcing me to brake (something he did apologise for afterwards).

I didn’t let it phase me, and got a much better run through Old Hairpin to overtake Sam up the hill, then driving hard to pull out 2 seconds by the next lap, chasing down Wom who was also getting a move on in the distance.

I’d also noticed the infamous black and white flag with the number 18 next to it – I’d been exceeding track limits, so also knew I had to tidy things up and stay well away from the green bits on the other side of the curbs. I knew I’d been taking a few liberties and cutting corners to the maximum, but wasn’t entirely sure if I was being warned for that or my excursion through the gravel trap at chicane.

Suddenly a red car appeared ahead – I could see that Tim Probert had a few bits of his car flapping around that shouldn’t be, so assumed he’d gone off or tangled with someone (I could see after he had a huge ding to his trailing arm). And like a shark I tasted blood in the water!

I hung onto the tail of him for a few laps, almost sticking my McLeans overtake on him before he finally seemed to gather himself together a bit and start to edge away.

By this time I was well clear of anyone behind, so it came as a bit of a surprise when I saw the white Sheane of Colin Gregory closing in. I took Old Hairpin pretty well, thinking I may be able to hold him behind me even though his (ex-Adam MaCaulay) is faster overall, but he flew past me up the hill doing about 20mph faster!

And then I saw the chequers, bringing it home 14th overall and 3rd in class behind Wom and Cooper.

The scrutineers pulled me and a few others in to check the chassis was all matching their spec drawings, which was new to me, but again my worries were more with the excess oil from the filler cap. This was likely related to being held for a long time yet again on the grid – occasionally everyone seems to forget that you can’t do that with aircooled cars! 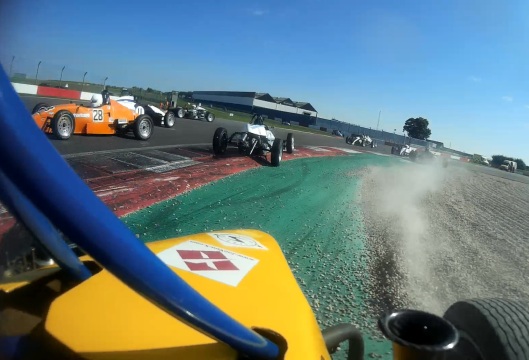 I was confident I could knock at least a second off my lap times, and this time I was starting ahead of Cooper and a few rows back from Wom.

As I chatted to my sister Michelle in the holding area, her boyfriend Mark Russell, who was helping out, noticed a pool of oil in the right side air scoop.

I flipped my mirror to have a look and knew it was over. Glenn had a quick look but there was nothing he could really do with that much time – a push rod tube had sprung a huge leak. I told Michelle to let one of the marshals with a radio know that one of the reserves could jump in to race, and we pushed the car back to the trailer.

I wasn’t even too angry about it (yeah I might have given the steering wheel a quick jab before I got out, but that doesn’t count!) – I think this year we’ve hit such bad luck it really didn’t surprise me!

As it happened the rest of the Vee’s only got a few laps in before a red flag – then with some car mistakingly following a retiring car into the pit lane rather than stopping on the grid for the restart, the race was cancelled. I bitterly thought that the car would have probably lasted long enough for me to finish!

In hindsight we should have just binned the old pushrod tubes and stuck a new set on with the rebuild (they’re fairly cheap), but it’s not something we’ve had before so didn’t know. 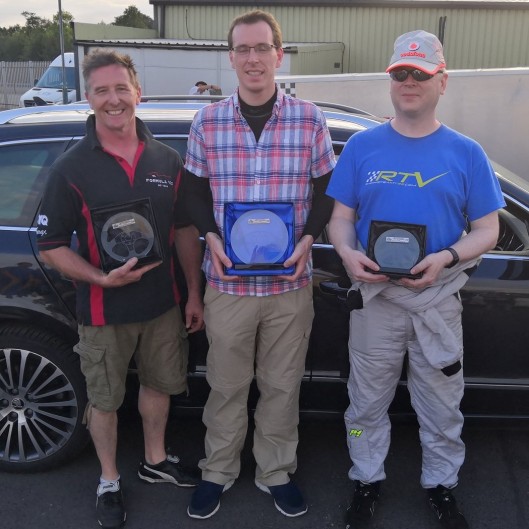 It’s yet another blow to my championship, but we’re still hanging around in 4th place going into the last round of the year. We debated bothering to go to Snetterton, but other than a 15 minute fix the car is ready, and I still need to see if my improved driving is enough to fight it out with Cooper – even though he is out of reach for the B Class win.

I have a feeling Wom will be a bit handy around Snetterton after many kart laps but then me and Jamie Harrison have scrapped it out there, too, albeit in the 300 track and not the 200. Vaughn Jones has shown very good improvement through this year and so he’ll be in with a chance of tying up a championship podium, too. And will James Harridge return for the last race?

It’s set to be a good one just for the Class B battle, but you can guarantee I’ll also be scrapping it out wheel to wheel with Sam, Ed, Rik and any of a host of others!

And that’s just around me – no doubt there will be more awesome 5 way battles through the whole field, and what’s been an amazing Formula Vee season that’s been turning a lot of heads in the motorsport world.

Come along and see the best UK single seater race series – and don’t forget to drop by and say hi at Snetterton on October 13th. 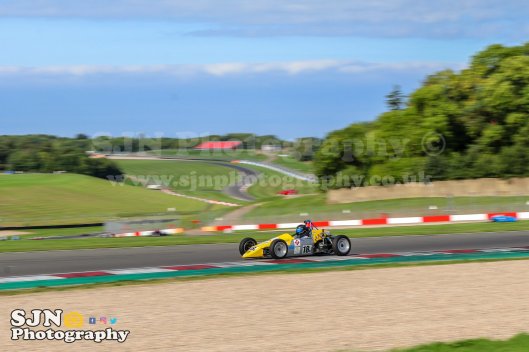