We all run Formula Vee with our ignition timing advanced. It’s a way to use all of the potential of higher octane fuels, and I’ve even heard some claim to be running more than 30 degrees advanced – but people in the paddock don’t always tell the truth for that kind of stuff, and even if they are doesn’t mean they’re sticking to the rules to be able to do that…

With the bodged-together engine since our old one died at Croft, we’ve been running less advance than normal. Using his vast experience, and with none of the right equipment, Glenn advanced us a degree or so to tap into a bit more bhp. Very risky, but I was getting slaughtered on the straights.

The car balance had help up fine, but corner exit grip was a bit iffy in places. The near-bald right rear tyre wasn’t helping, so I dropped the pressure a little on the rear to see if I could get it to dig in a little more without just overheating. A rear anti-roll bar would have been useful here, as a few clicks harder would have been good, but I was reluctant to change our rear damper settings as I suspected it was more the bumps upsetting that aspect of the car, and other drivers were saying the same.

All this aside, I knew everyone else would have made improvements or just learned the track better, so they would all be putting faster lap times in, relatively (technically about a second slower than Saturday, because of the heat).

The lights went out.

My plan was to latch on to Ian Buxton a few rows directly in front of me, and though we both started quickly, by the time I snatched second gear his car was already picking up it’s petticoat and giving it legs over mine.

I’d blasted past Bill Stenning and had Andrew Cooper ahead for second in class B as my target, when Bill Garner appeared on my left.

I held the inside and let the brakes off to ease up to the inside of Cooper around Hawthorne. He had to concede my better line through the chicane, although it pushed me wide on the exit, where I found air under my right wheels at the end of the curb, before manhandling it all back onto the tarmac.

Watching Cooper in my mirrors, I hammered it into Tower but the tyres didn’t quite have the heat in them to grip. The rears lurched into oversteer mid-corner, which I collected with a flick of opposite lock but this meant I had to delay getting on the loud pedal.

Cooper got the run off the corner and just had his front wheels ahead as we turned into the Jim Clark Esses – normally taken flat out with only one line through.

Cooper was throwing up all kinds of dirt from his outside line, and with him still just ahead, to avoid disaster for the right hand exit, I had to ease off and let him through. I tried to fight back on the inside into Barcroft, but he closed the door.

All this had definitely slowed us down (I hadn’t even changed up to fourth gear!), but luckily Garner had stayed behind (probably expecting us to crash) and I got on the throttle early into Sunny In and let the car slide all the way around onto the next short straight.

I had one last snap at Coopers heels into the hairpin but then he was edging away and I just sat back and tried to see exactly what he was doing, so that I could try and copy it. 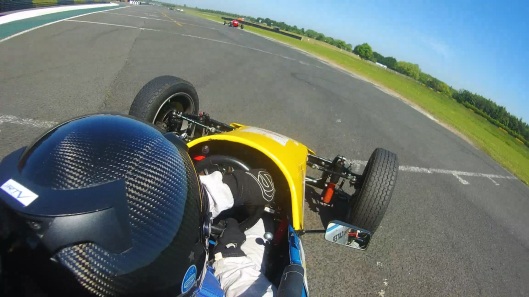 My car felt like I could do anything with it. I was getting pretty out of shape in places, but there was never a moment where I though I might lose it… where I wasn’t fully in control, really. Something had definitely clicked in my head and I think it has a lot to do with confidence.

Although losing Cooper, I was also steadily drawing away from Garner in my mirrors (with a flash of Jamie Harrison before he encountered problems), but wasn’t cruising to maintain the gap as I was enjoying it all too much.

I remember going into Sunny In far too quickly, still trail braking and clearly overcooking it all, and just planting the throttle to bring the rear around as I drifted up to the edge of the curb on the exit as if nothing had happened.

And of course there was lots of opposite lock as I tried to get whatever was left of the tyres to do something out of the hairpin.

I’d been noticing my pit board, for once, too – I think the first time was when Craig Bell must have spun off, and I caught him onto the pit straight. My board read ‘P10’ so I was chuffed with that, and gave Glenn, Mark and Michelle and thumbs up! 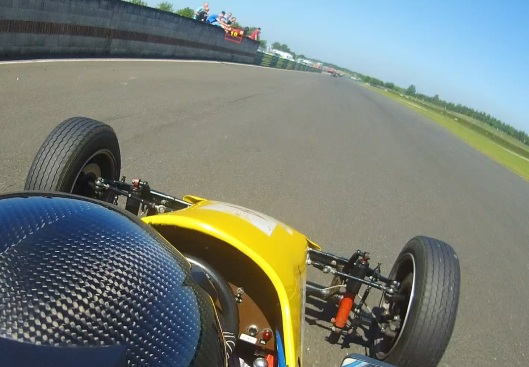 Suddenly the red flags were out as I came into the complex, and I dived into the pit lane pretty sure they wouldn’t bother restarting the race.

Sure enough, the marshals waved me down pit lane and through into the holding area. There was nobody here to stop me, and I was first off the track, so I was a bit paranoid about getting a penalty, but if the gates were all open and nobody was there, surely that couldn’t do me for it?

I rolled back happily to our awning before getting out to shake hands and chat to the other drivers. It’s nice to see the respect we all have for each other after the races, despite how hard we race.

Oh, and I had my first ever trip to a real life podium for coming third in Class B, with a great trophy! And 10th place overall gives me my best ever result to date (not counting non-championship results), and it was earned the hard way rather than through attrition of the front-runners.

There is still loads of work to do before we go international and head to Mondello Park in Ireland in July, and I’m a bit gutted that it’s so long away, as I feel like I’ve unlocked something in me as a driver. I need to get back out there right NOW and try it!

With time to work on the car and address some of our issues, it looks promising for the trip, though – and at last I’m back in the championship with a strong chance of racking up points! 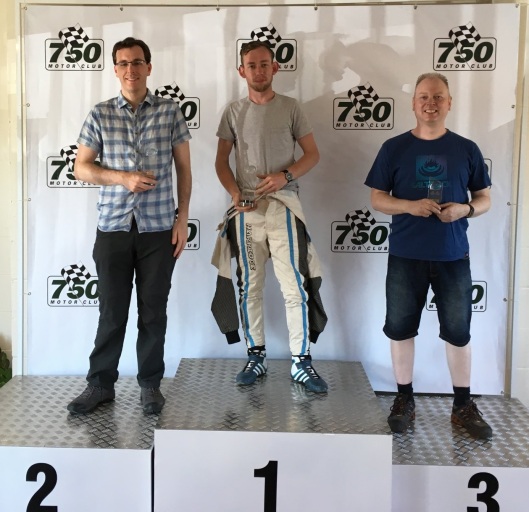 Lifestyle blog about racing, and other nerdy stuff