And so the 2017 season is fast approaching!

With the legendary Paul Smith leaving Vee in favour of the RGB championship, the battle for the top spot is the most open it’s been for a fair few years.

Martin Farmer is always a threat if he’s able to commit to a full season. Or sticking with Bears, Paul Taylor and Dave Hughes could finally make the impression they’ve been pushing towards for the last few seasons. Graham Gant is always a serious contender in his Worms Eye View car – with the ever-charging James Harridge improving his own home built Maverick and as hungry as ever.

Whenever John Hughes and Pete Belsey put in an appearance they’re straight on the pace, but then Steve Ough is making his return to Vee after picking up a few wins in the Crossle Sportscar in his time away. Ian Jordan must get some luck from his Superman t-shirt soon! Then there are Ben Miloudi, Tim Probert, Craig Pollard, Jack Wilkinson and Maurice Gloster always pushing up to the pointy end – if they can keep some more consistancy they could be in there, too.

Or will Adam Macaulay – the only other person to beat Smith last year – take the British title to add to his Irish success? He’d have to scrape in as favourite for this year.

We may not see Ian Buxton for a while, as his crash at Brands Hatch at the end of last year leaves him still recovering from a broken back, but hopefully he’ll be back on track soon. I think Harry Webb could have been up there if he tried a second season in Vee, but he’s pushing for bigger and better things, and I hope that comes together for him.

Or there are the real outsiders, either brand new to Vee this year, or those like myself – still learning and getting faster all the time, just waiting for everything to click into place. And we’re the underdogs, so everyone wants us to win!

Whatever happens, we’re sure to see a lot of great racing all through the pack – and that’s what always makes Formula Vee such a favourite with spectators and drivers!

I’ll look forward to seeing you all out there! 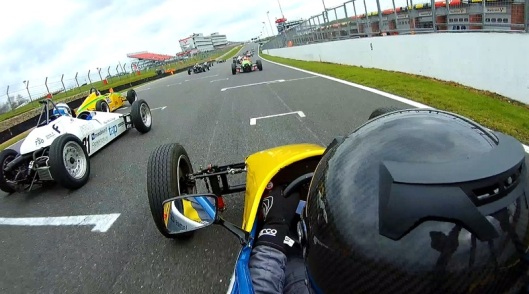 Well, the end of 2016 was the end of my first full season – although the thing I wanted to do as a kid is still far from over.

I think I’ve come on a long way but am fully aware there’s still a huge jump to be made to get me consistently inside the top 10, and THEN I’ll still have to find something more to get in with the top boys!

I have the confidence in the car and my abilities to be able to push the limits, but still have to be conscious that it’s Glenn’s car and he’ll be the one doing 95% of the work to fix anything I break!

Testing would be a huge bonus, but my budget won’t really allow for that, so any progress I’ve made in 2016 has had to be done at very high risk in qualifying and in the races. This really becomes apparent with our wet set-up, at the moment, and I’d love to be able to get on track to be able to play around with suspension settings a lot more.

That said, I’ve consistently been the fastest or one of the fastest at a new track out of those who haven’t tested or raced there before, so I must be doing something right!

I may also try and brush up on my set-up understanding and knowledge by using computer games, so I can give Glenn even better feedback and try and find something big there.

I’m loving my little on track rivalries, and it’s been good seeing rookies come in the series and watching how they’ve developed, too.

I need to make sure I’m watching my footage back between races, as it’s no good identifying something I was doing wrong once I’m back at home and won’t be back at that track for a year or more.

We’ve had some problems over Winter that were looking like Glenn wouldn’t be able to even look at a race car, let alone prep it for racing, but recently we seem to be back on again. We both seem pretty confident that we can make the grid this year – which if you’d asked me a month ago wouldn’t have been the case.

This has meant the search for sponsorship has taken a huge knock, but I believe UK action/dash camera company JooVuu will be in partnership with us again in 2017, and we have another few exciting things in the pipeline with others. I realise we’ve missed the main window for getting the deals done, but it’s not over yet – and if you’re reading this and would like to find out what we can do for each other then please get in touch.

2017 should see the Ray out as well as the Sheane at some point, and hopefully the multi-championship winning Scarab will be out in either rolling or running form, too. Glenn will be having a look at remounting the front shock absorbers on the Sheane, and finding more power from the new engine.

It is becoming a bit more obvious that I’ve missed out on the years of karting or other racing/trackdays that most others on the grid have, and my learning potential is definitely limited by it. It’s hard to know how to claw back some of this disadvantage – but that will be the focus of this year. If I have the budget and opportunity I’d like to have a crack at drifting, some off-road/rally stuff, and some karting, as well as continuing to ask questions, research everything I can, and listen to other drivers.

If I can improve on the 6th place overall in Class B, that will be good, but I have no doubt the competition will be even more fierce this season!

There do seem to be a lot of new tracks on the calendar for 2017, which is bad as I can’t compare my performance to the last time, but good in that it knocks out the advantage some others may have. And I have done a few track days at some tracks on two wheels, so should at least know where they go and which corners I can get my knee down on!

I’ll look forward to seeing everyone back out there again, and let’s hope everyone has a great year!