“What experience do you have?”
“Loads of bike track days, and car skid control courses and, err, stuff.”
“What are you going to race?”
“Formula Vee, next season!”

That was the last moment I felt confident on the day of my ARDS test!

Luckily, not everyone there (there were about 18 of us) had done loads of car track days and stuff, so I wasn’t alone in my lack of experience, but then the instructors spent the next part of the morning basically telling us all we weren’t going to pass today.  I guess this was a good thing, as it knocked the cocky straight out of you.  Especially when you learn that Silverstone is the toughest place to pass the ARDS test (although this can also work in your favour as Race Stewards will look on you more favourably if blame needs to be apportioned for an on-track incident).

After a brief chat about the basics that we should already know (race lines, car physics, under and oversteer etc), we split into two groups – one group going off to the skid pan whilst my group were first out on the proper track.

The instructors were people I almost recognised.  If I could remember their names you’d probably know a few, too.  I clocked Ian Flux who I know from old Formula Vee and Tuscans but hadn’t seen him since I was tiny. He wasn’t my instructor, so no chance of favouritism there!

I got Neal.  If you know who Neal is, please let me know, because I didn’t get his surname, and the sheet he filled signed I never got to take home!  He was great, anyway!

So, I was literally one of the first to jump in the Renault Magane Sport test cars.  The six speed gearbox felt flawless, but, not being a car I’ve ever driven before the controls were a bastard.  The throttle was too sensitive, the brakes too sharp.  Heel & Toe was ditched immediately – I had far too much else to worry about.

We pulled out onto the Silverstone International circuit which I have never seen before in my life and began wishing I’d looked at on YouTube.  It is very fast, and not the simple 4 corner layout of the National track that I was expecting!

So that’s all my excuses.  In the first session we did about 15 mins worth building up speed (instructor first for a few laps then me), and I realised I was In Trouble.

It was my first time EVER driving a car on a race track.  I went into 6th gear a few times when I wanted 4th, and was braking, coming off the pedal and then braking a bit more into corners.  I was feeding the steering wheel a little instead of keeping my hands at quarter-to-three.  My lines weren’t terrible, but transitions were ragged and nothing was very smooth.

There was no way I would pass unless I seriously got my act together.  And fast.

We had a second session for 15-20 mins and I was consciously trying to improve everywhere, plus looking through the corners and doing a respectable pace.

And I think pace was my biggest problem overall.  I have absolutely no frame of reference to what a fast car is on a track.

On a bike track day I’m busy all the time.  On the edge of my abilities, but not exceeding the bikes limits.

In a car it’s the opposite.  Because I’m used to thinking at 1000hp-per-tonne performance levels, cars are S L O W…

I had far too much time braking into corners.  I could have done some knitting and still made the corner.  The car felt so much slower that it almost felt like I was coming to a complete stop before the tight corners, and then waiting an eternity to get back on the power.

Once race driving is in muscle memory and I can do it all naturally without over thinking it all, this may well work to my advantage – but it was a major problem for me here.

Neil showed me a different way to hold the gear stick to improve my changes and stop getting 6th gear by accident.  Great, but this meant I had just a few laps left before the test in which to completely rewire my brain of how I’ve shifted gear on the roads for the last two years…

Next was the skid control, with the cars on cradles to simulate oversteer around a course of cones.  This was no problem for me, as I have done skid control in cars before, so was more a bit of fun getting it drifting.

Going into the lunch break I knew I’d improved a lot, but I still had a massive amount of work to do on my driving. 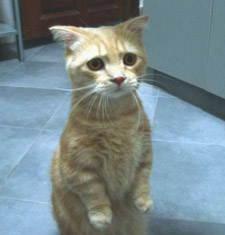