A ride in a Seabreacher

A few months ago I saw a pretty cool video doing the rounds on Facebook of some enclosed jet-ski-type thing that blasted through the water like a shark.

It was one of those things that you watch in awe, and then just forget about, as you know you’ll never actually see one in real life.

So as I strutted my blue-skinned self along the beach front of Sunny Beach, Bulgaria, I found myself doing a huge double-take as my eyes spotted this:

I made a bee-line straight for it to get a closer look.

It’s called a Seabreacher – this model I believe is the X-spec one and the most powerful. Here are the specs as standard:

The deal was a 7km passenger ride for 110 Lev (about £45) – which is quite expensive in Bulgarian terms, but could I really pass up this opportunity?

I paid up and had to sit on the beach waiting to catch my first glimpse of the Seabreacher in action, as it headed over from another part of the coast, my heart rate already showing an excited 120bpm on my FitBit.

Now, I don’t really like the water. That said, I’ve always fancied a bit of powerboating – probably because of my racers mindset that nothing can possibly go wrong for me, so I’d never actually end up in the water.

As I saw the Seabreacher bobbing towards me, I was told to wade out into the Black Sea as the driver/pilot climbed out and pulled his seat forward to make room. 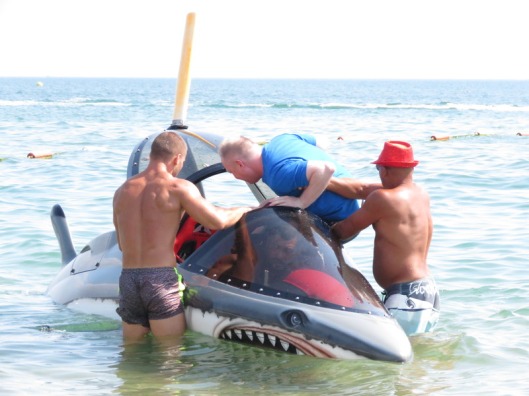 I deftly scrambled into the cockpit and they strapped me into a 4 point harness.

Once the driver was back on board, the revs rose as he pootled out into deeper water with the canopy still open. Once there, he pulled it shut over our heads, and it was down to business.

It didn’t feel too claustrophobic to me, as it’s a big old canopy – but you are quite enclosed by the sides and the back of the pilots seat, and your legs have to go around his seat down the sides.

The whole craft vibrated as he spiked the revs up to 9000rpm, and we danced over the waves surprisingly gently. There was none fo the slap you get in boats and jet skis as it crests a wave and slams back into the water.

He swung hard right, the Seabreacher tipping right over on its side like a motorcycle or plane banking into a turn – the canopy turning a deep green as the sea covered us.

Then the sea started coming in over me! Reading the website, there is supposed to be some kind of seal that the driver inflates to seal the cockpit – but that was either broken or not used here. That meant that every time we went under the water, the water came in and absolutely soaked me! The Black Sea is very cold – but in 30 degree sunshine I wasn’t going to worry about this. You never feel like it’s going to fill up and drown you or anything – in fact I never even felt water pooling around my feet, so it must pump it out again pretty fast.

Not that I had too much time to worry about this, as we came out of the banked turn by breaching out of the sea (hence the name – just like sharks, wales and dolphins do!), jumping out over the waves briefly before diving back in, full on the throttle.

He then killed the revs, bringing us almost to a stop, before suddenly opening the throttle fully, and the nose dipped down below the waves as we ploughed downwards into the green depths.

A few seconds passed in the green gloom before we were headed straight up, breaking through the waves at a 90 degree angle into the blue sky, even the tail fins launching clear of the water, before tilting and coming down belly first. 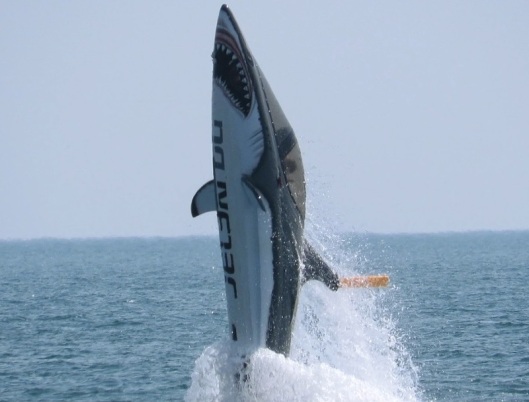 Experienced drivers can get the craft airborne and do a barrel roll in mid-air, too!

It was a great and very unique experience, and a lot of fun!

However, it wasn’t as extreme as I thought it might be. that’s probably more to do with the fact I’m used to racing cars, or scraping my knees on the tarmac at 100mph+ – and I can see how it would blow most people’s minds. I think with an extra few hundred horsepower it would be an absolute beast – and I’d love to have a play around in even a standard one!

It was good seeing something I never thought I’d lay eyes on, and actually getting to experience it. If you ever see one, then do everything you can for a go, because it is worth it.

I guess I’ve already pushed the bar up so high it takes more to really get me going!

And a short video I made from the footage: